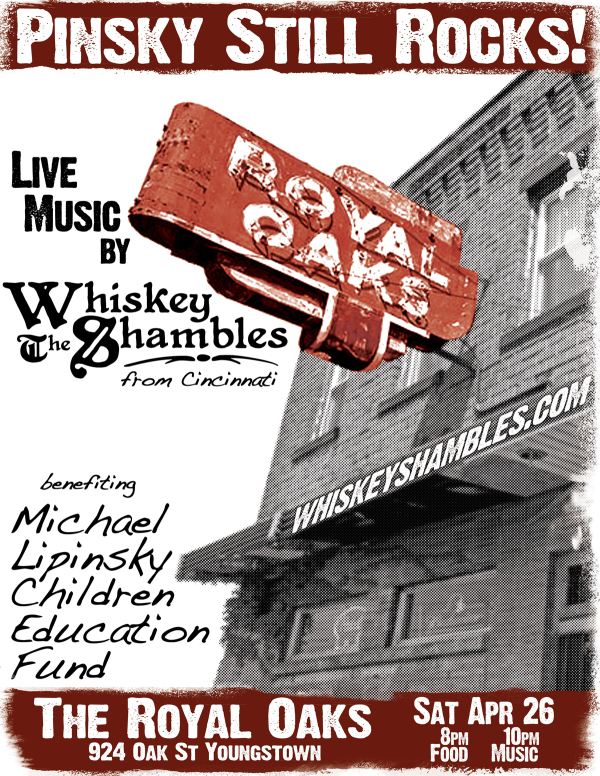 CINCINNATI, OH – April 14, 2014: The Cincinnati blues-rock quartet, The Whiskey Shambles, will present a benefit show at The Royal Oaks, on Youngstown’s east side which will include food, prizes, and live, original music.  The event “Pinsky Still Rocks!” is in honor of Michael Lipinsky, who passed away suddenly on December 13, 2013, at the age of 40, and proceeds from the event will go to the Michael Lipinsky Children Education Fund.

The Shambles’ bassist and harp player, Brother James, was a friend at Cardinal Mooney High School and college roommate of the late Mr. Lipinsky.  “I’ve known Mike since high school, and we had many great adventures together at college,” explains James, “so I’m happy to be able to do this for my friend and his family.”

The Whiskey Shambles are an original garage rock/basement blues band from Cincinnati, OH, formed in 2012 by Nathan Singer (of Starshaker and Absinthium fame) and Brother James (founder of the Cincinnati Entertainment Award-winning blues band Voodoo Puppet).  Their sound has been compared to Screaming Jay Hawkins, The Black Keys, Ten Foot Polecats, The Heavy, Gary Clark Jr., Black Diamond Heavies, and The White Stripes.  They have been described as, “R.L. Burnside and Black Sabbath jamming with Nina Simone in a burned-out rum shack, using opium for incense.”

The Shambles are currently working their way through the dive bars and juke joints of the Midwest and Rustbelt, with occasional trips to more exotic locales, like Memphis or Buffalo, New Orleans or Asheville, Atlanta or NYC.  They’ve been nominated for a 2014 Cincinnati Entertainment Award in the Blues category, CityBeat magazine’s Best of Cincinnati 2014, and several of their song releases have earned critical acclaim — receiving steady airplay on several regional radio stations, as well as a variety of Internet radio stations.  Having previously released the EP “One Last Blast: Live at the Mad Frog,” they are set to release their first full-length CD, “Loose Change for a Broken Man,” in June of 2014, and are already working on their second full-length album.

Learn more about The Whiskey Shambles at WhiskeyShambles.com, including their Press Kit, Music, and Photos.

Event details will be updated as more information is available.  Please see (and share) the Facebook event for the latest news:  http://facebook.com/events/647633915307961/

Event organizers, and the band — The Whiskey Shambles — are available for phone/email interviews prior to the event.

We are currently scheduling live, in-studio appearances (radio and television) for the week of the event (some band members will be in town on Thursday, April 24 and Friday, April 25).

About the Education Fund:

Those not able to attend are encouraged to make contributions to the Michael Lipinsky Children Education Fund.  “Even if people can’t be at the event,” says James, “I hope they’ll take the time to make a donation, so that Mike’s kids can have the future that he wanted for them.”  Donations can be made at a Home Savings & Loan branch, or checks can also be made out to the: “Michael Lipinsky Children Education Fund” and mailed to: