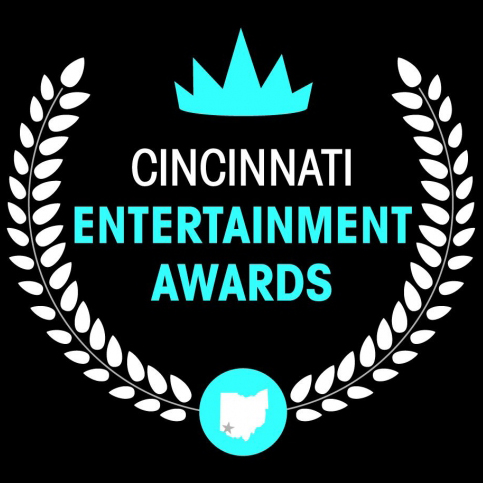 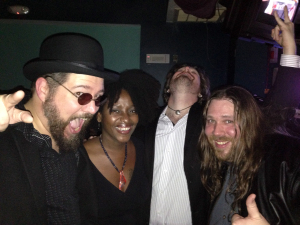 CINCINNATI, OH – November 18, 2014:  In honor of The Whiskey Shambles‘ win at the Northeast Ohio Blues Association (NEOBA) Challenge, which qualifies them to compete at the International Blues Challenge in Memphis in January 2015, the band has worked with Cincinnati’s Rivertown Brewing Company to create “Shambling Southward – Dubbel Barrel Blues,” a Belgian Dubbel aged with brandy-infused wood chips.

“We started talking with Rivertown this summer about brewing a special beer to celebrate our trip to Memphis, working with them to develop an interesting brew that our fans — and craft beer fans — will love,” said Shambles bassist Brother James. “After much discussion, we all agreed that this recipe captures the band’s unique sound and spirit in liquid form.”

Rivertown Brewing Company, which has recently begun a transition to focusing on wilder varieties of beer (with an emphasis on Belgian and sour styles), has been experimenting with small batch recipes — exploring ideas from the brewery’s staff, not just the brewers.  “Their DIY attitude and spirit of exploration really spoke to us,” explains Shambles frontman Nathan Singer.  “Rivertown was the perfect brewery for The Shambles to partner with.”

The beer will be tapped at a special event on January 16, 2015, at the Rivertown Brewery Taproom, with a performance by The Whiskey Shambles starting at 7:00pm.

Rivertown Beer Evangelist (and co-developer of the recipe) Roxanne Westendorf, explained this unique beer: “The Belgian Trappist Monks know how to brew very special beers. We took their genius of the Belgian Dubbel and added brandy-soaked wood chips to the secondary fermentation stage, to blend with this style and make a beer that is as spicy as The Whiskey Shambles.”

“We’ve always described The Shambles sound as a loud, belligerent style of demonic hill-stomp blues that almost . . . but not quite . . . betrays an air of subtle sophistication lingering just around the edges,” Brother James clarifies. “This brew combines an exciting wallop from the brandy with the gentler refinement of the Belgian style, making it a perfect pairing with the band: a blast of what we’re calling, ‘Dubbel Barrel Blues’.”

The Shambles are currently working their way through the dive bars and juke joints of the Midwest and Rustbelt, with occasional trips to more exotic locales, like Nashville or Buffalo, New Orleans or Asheville, Atlanta or NYC. They won the 2014 Northeast Ohio Blues Challenge, and have been chosen to represent Northeast Ohio Blues Association at the 2015 International Blues Challenge in Memphis, TN. They have also been invited to showcase at the 2015 Millennium Music Conference. The Shambles have been nominated for a 2014 and a 2015 Cincinnati Entertainment Award for best Blues act, and several of their songs have earned critical acclaim.

In 2012 The Whiskey Shambles released the EP, “ONE LAST BLAST: Live at Mad Frog.” September 2014 saw the release of a second live EP, “Stumbling Toward Beale Street.” Their first LP “Loose Change for a Broken Man” was released in November 2014, and several songs from it receive regular airplay on many college and AAA radio stations. The Shambles are already working on their second full-length album, with plans to head into the studio in spring of 2015.

Rivertown Brewing Co. specializes in brewing handcrafted, flavorful ales and lagers, using only the finest and freshest ingredients available.  Opened in 2009, the brewery produces a variety of brews, and recently changed its focus to wilder varieties of beer with a emphasis on Belgian and sour styles.

Rivertown is located in the Cincinnati suburb of Lockland, and has been growing steady for several years, most recently with its newly expanded tap room and new bottling line.  More information: http://RivertownBrewery.com 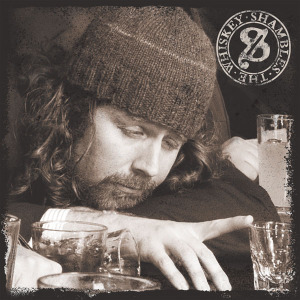 There’s only a few days left to write in The Whiskey Shambles and our album “Loose Change for a Broken Man” on WNKU’s annual Top 89 albums list. If you could do us a solid and scribble The Shambles in before voting ends on Friday, Dec. 19, we’d really appreciate it.

Thanks WNKU, and to everyone who plays, supports, and loves local music!