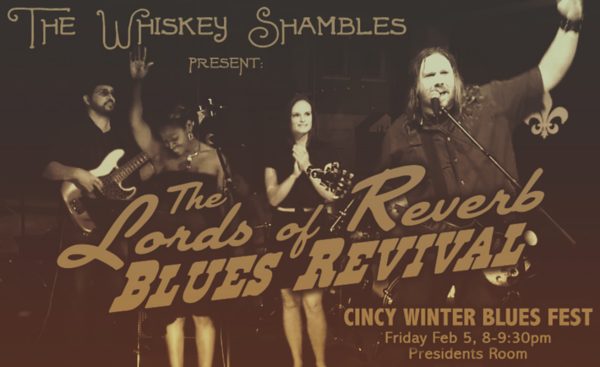 The Whiskey Shambles will be playing the Winter Blues Fest in the Presidents Room at The Phoenix, in downtown Cincinnati on Friday, February 5, from 8:00pm to 9:15pm. (The fest continues on Saturday, Feb 6.)

The Shambles have chosen the 2016 Cincy Winter Blues Fest to debut their new stage show: “The Lords of Reverb Blues Revival.”

We stand on the shoulders of giants and carry the weight of music that comes from deep within the soul. Their burdens shaped their spirit, and carved deep scars in their sound. We pay homage to the greats who have come before us. The wolves that howled, lemons that were blind but saw so much, those with lead in their belly. Long before the age of electronics, their words rang out like thunder from the hills, needing no reinforcement, no artificial echo. We honor the Lords of Reverb. 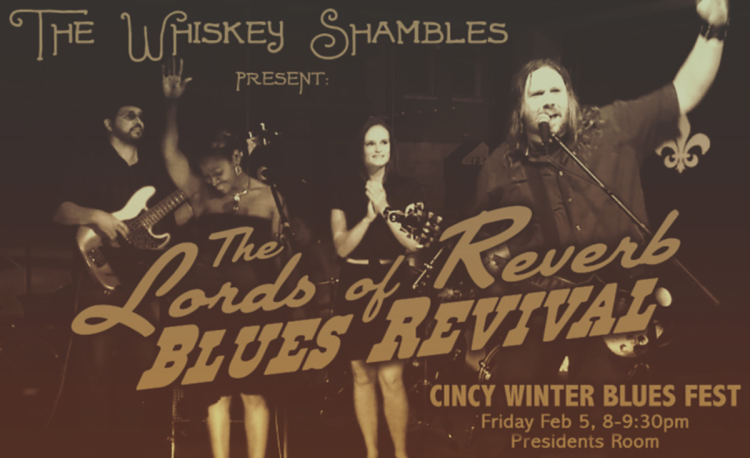 The Whiskey Shambles new blues stage show, in the “tent-revival” style, features a tribute to the legends of north Mississippi hill country blues and delta performers, as well as many of The Shambles’ critically-acclaimed blues originals.

This is a new era for The Whiskey Shambles… separating their pure “blues” content into its own show, so that their main Shambles shows can be free to explore a variety of genres, and not be hindered by any labels or expectations.

“We are a rock band with a blues foundation. AND we are a blues band with a rock edge,” explains Shambles’ bassist Brother James.  “But we’ve been told we’re ‘too blues’ for this rock event, or ‘too rock’ for that blues fest.  Most of what we do is a melting pot of rock, blues, soul, gospel, folk… roots music.”

Shambles frontwoman, LaTanya Foster, clarifies, “We can play a pure-blues show, if needed or requested.  But many venues, bookers, and promoters don’t separate the two, or understand the distinction.”

The creation of this special stage show is an opportunity for The Whiskey Shambles to offer venues and festivals two different ‘versions’ of The Shambles to choose from.  A high-energy “tent revival”-styled blues stage show, “bordering on a theatrical production,” Foster explains, or a dark, gritty rock show, “speeding off a cliff at full-throttle.”

Nathan Singer, co-founder of the group, concurs, “Whooooo well well,” and turns back to his bottle of rotgut.

The event is a fundraiser for the Cincy Blues Society’s Blues In The Schools program.

One thought on “The Shambles present: The Lords of Reverb Blues Revival”